Introduction to Climate in Human History

Climate events have played a major role in shaping the course of human history. Numerous examples of such events are listed below, and their impacts on human history are explored in this teaching resource. 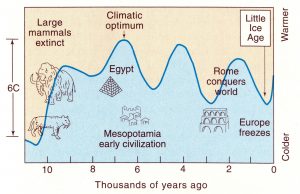 This illustration shows temperature variations (in ℃) over the last 11,000 years and some corresponding events in human history (from “Climate in Human History” in Prothero, Donald R., and Robert H. Dott. Evolution of the Earth. 8th ed, McGraw-Hill, 2010).