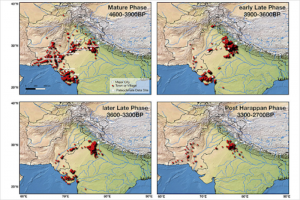 Maps of the settlements of the Indus River Valley Civilization over time. Red dots represent towns and villages and white dots represent major cities. Notice how civilizations migrated east and how the number of cities decreased over time. Note that the years on the map are in years BP rather than BCE (BP = years before present; years BP = years BCE + 2000 years) (from Nield 2020).