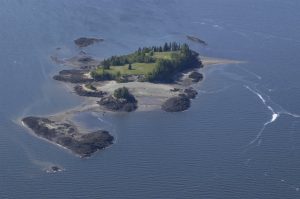 An overhead view of St. Croix Island, which today is an International Historic Site (from Visit Maine).