This semester I worked on a project with John Berryhill, the Landscape curator for the Botanic Garden of Smith College, where he was studying a tree species’ viability at different elevations. John’s study sites are in three counties located in western Virginia. For this project I made four different maps which show (1) the general location of the study sites and texture of the ground, (2) the climate of the region over the last 30 years and (3) the elevations at which this species can be found in each county (for example, >600m and >900m).

After a number of attempts at using the Virginia (VBMP) Orthoimagery Downloads, I ended up using the Aerial Photography Most Recent (VGIN) layer from ArcGIS Online to show the texture of the ground. The study sites coordinates were imported as a data table into ArcGIS Pro. 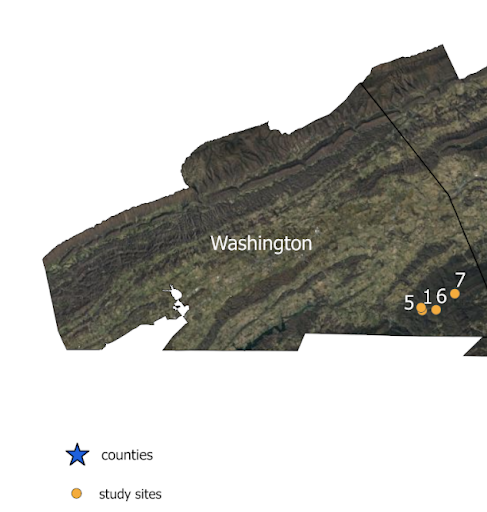 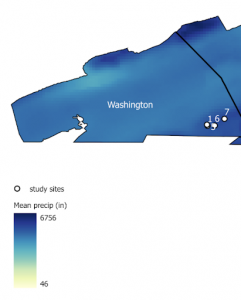 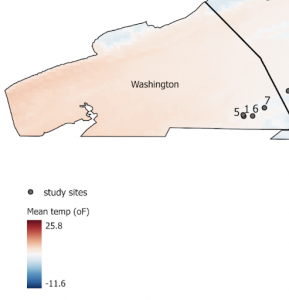 To get the elevations at the study sites, we used the Ground Surface Elevation -30m digital elevation model from the ArcGIS Online database and used the Contour function to make contour lines that join areas with the same elevation. We used the 100m contour interval to get more detail from the map. One of John’s goals is to study the elevation ranges at which this species thrives, so for each county I calculated the areas which were above specified contour ranges, for example, >=600m and >=900m. We used the Select by Attribute function to filter for counties and elevations then calculated the areas above those elevations using Calculate Geometry. 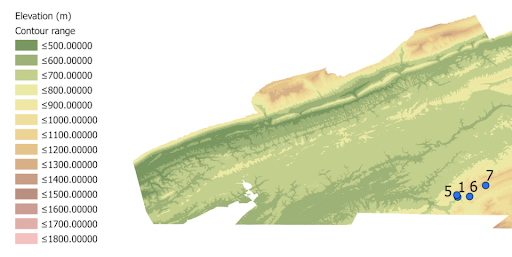