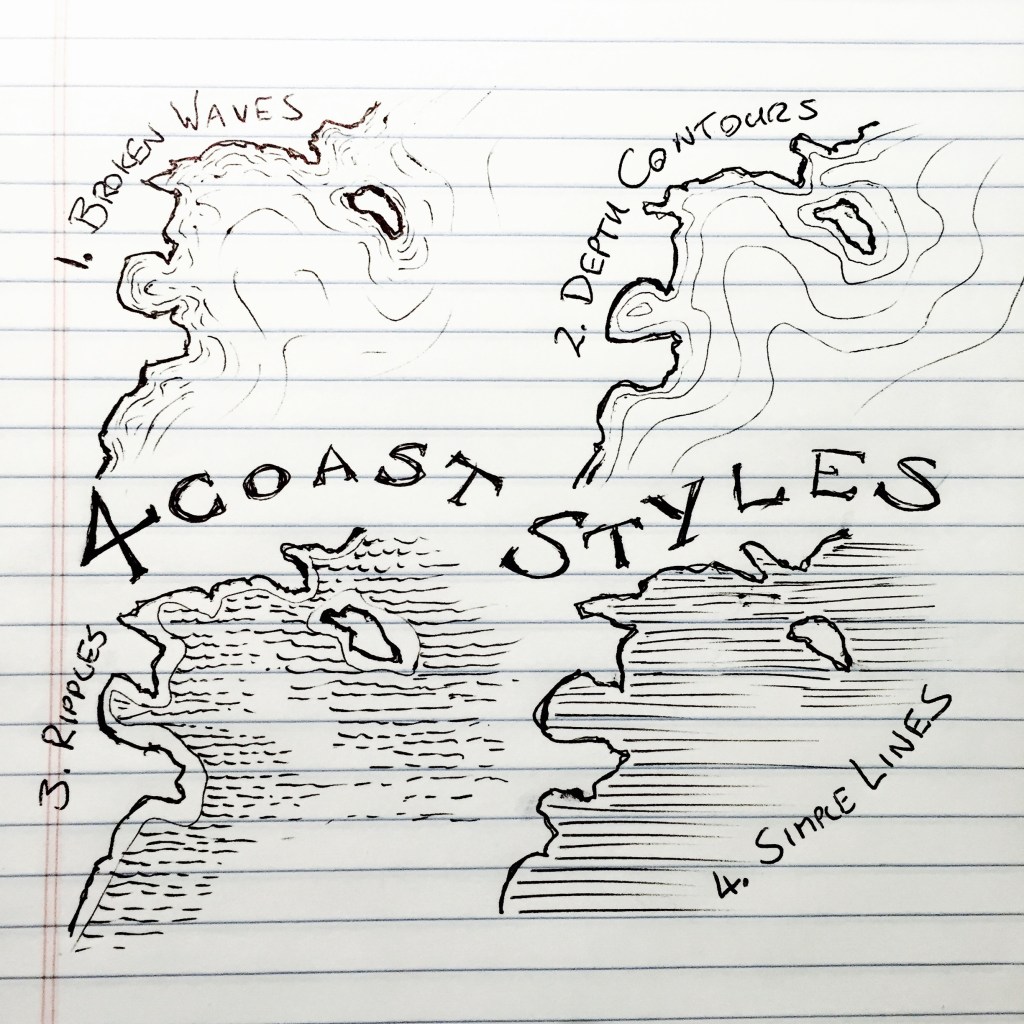 Two weeks ago, I attended the annual conference of the North American Cartographic Information Society (NACIS) in Colorado Springs as part of our ongoing efforts to integrate design thinking into how we teach cartography at Smith.  Attendees come from all corners of the cartography world: from illustrators of fictional maps to developers of map-based mobile applications.  As someone who primarily deals with the digital side of mapmaking, it was illuminating to see the diversity of methods that one can use to make a map.

Perhaps the most important lesson I took away from the conference is that hand-drawing maps is something everyone should do, even if your finished product will not be hand-drawn.  Ryan Sullivan of Paste in Place gave a talk about how sketching fits into his digital workflow.  He emphasized that sketching his designs before turning to his computer helps him to focus on his raw ideas and not whatever software package he happens to be using, allowing him to transcend the technical constraints of his software.  Importantly, everyone can draw some kind of map, even if you’ve never taken a cartography class before.  After hearing Ryan’s talk, I’m convinced now more than ever that the best way to learn cartography is by drawing maps, even if they are imperfect and inaccurate, so that you can focus on the larger questions of communicating spatial data to a specific audience rather than on which buttons to push.

The next day, I learned that, even if you only use digital tools, your map sketches do not have to be confined to your sketchbook.  Dylan Moriarty of Development Seed talked about some awesome tools that let you integrate hand drawings into digital maps.  For example, Adobe Illustrator has a function that will convert a scanned sketch into SVG, a file format that can be incorporated pretty easily into GIS and web maps.  Using your own sketches can lend your maps a unique style, and you can add flair that would be difficult to do in an exclusively digital workflow.  I imagine that this could be a great transition from sketching to digital tools for the beginning cartographer.

If this intrigues you, be on the lookout for opportunities to draw maps in the SAL, such as our “How to Make a Map” workshop in the spring in which will use the principles of design thinking to teach cartography.  In the meantime, if you want to get started drawing your own maps, here are some great resources that I encountered at NACIS:

Make sure to share what you create with the SAL, and on Twitter with the hashtag #cartographersketch!