Back in June, I had the pleasure of spending a week in San Pedro, Ambergris Caye, Belize, assisting the Coral Reef Edventures program, known as Coral Ed for short, with their marine ecology research.  For the past 14 years, adventurous Smith students interested in marine science and education (among other topics) have ventured to Belize for six weeks in the summer with the program, which was founded by Al Curran (geosciences), Paulette Peckol (biology), and Susan Etheredge (education) and is now run by Denise Lello and David Smith (both biology). This year’s students, Mandy Castro, Laura Henry, Emma Becker, Emmiline Koopman, Hayley Reifeiss, and Ziqiu Zhang, spent the first two weeks researching the marine ecosystems which make Belize one of the most biodiverse countries in the world and a very popular destination for divers and snorkelers.  They then passed their newfound knowledge on to the children of San Pedro during a series of free, sustainability-themed summer camps.

While I was there, the team was investigating two sites: a group of coral mounds known as the Mexico Rocks, which were protected as a marine reserve just a few years ago, and the island’s inner lagoon.  This lagoon is not exactly the paradisiacal South Pacific lagoon that you’re probably picturing right now – instead of clear blue water and dazzling white sand, think swampy mangrove trees, crocodiles, and the occasional drug smuggler (they only really come out at night though).

I helped the team in my capacity as a drone pilot (and occasionally as golf cart driver). Using our DJi Phantom 3, I collected aerial imagery of both study sites to help the research efforts.  We were easily able to get great aerial imagery of the mangroves, as there is less wind on the interior of the caye than out towards the ocean.  During the mangrove missions, the drone team had the easy job: while we were on the sticks, the rest of the students were out kayaking among the crocs, taking all kinds of measurements of the mangrove trees. We even finished early and had some extra time to document the excursion from the air! 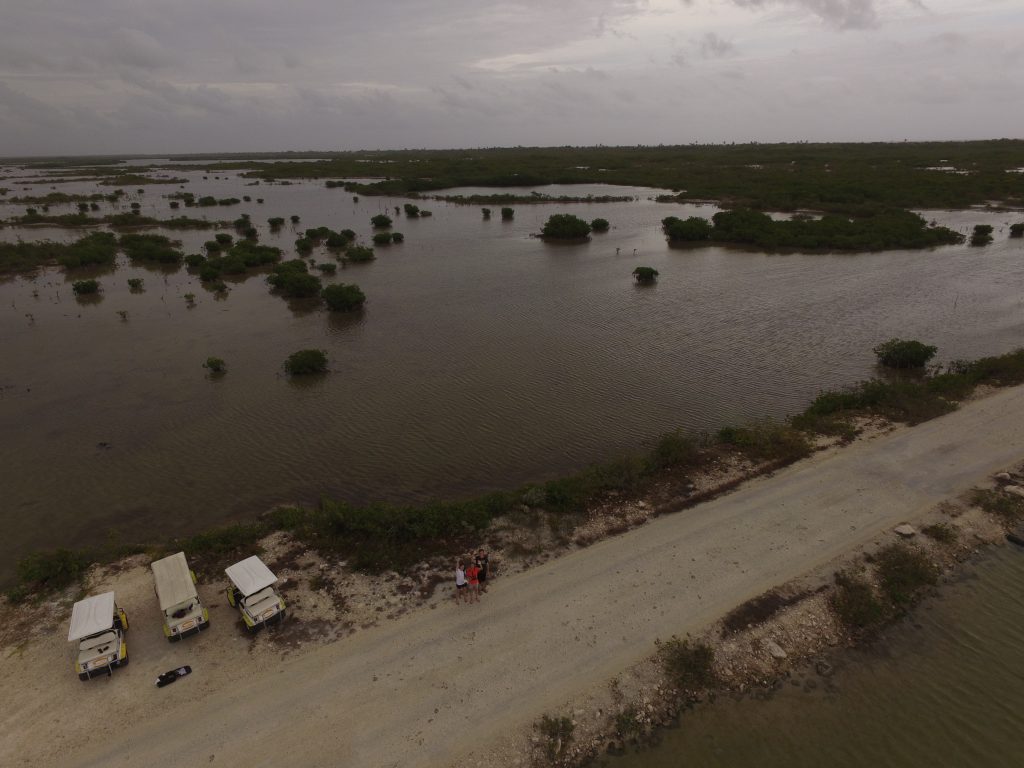 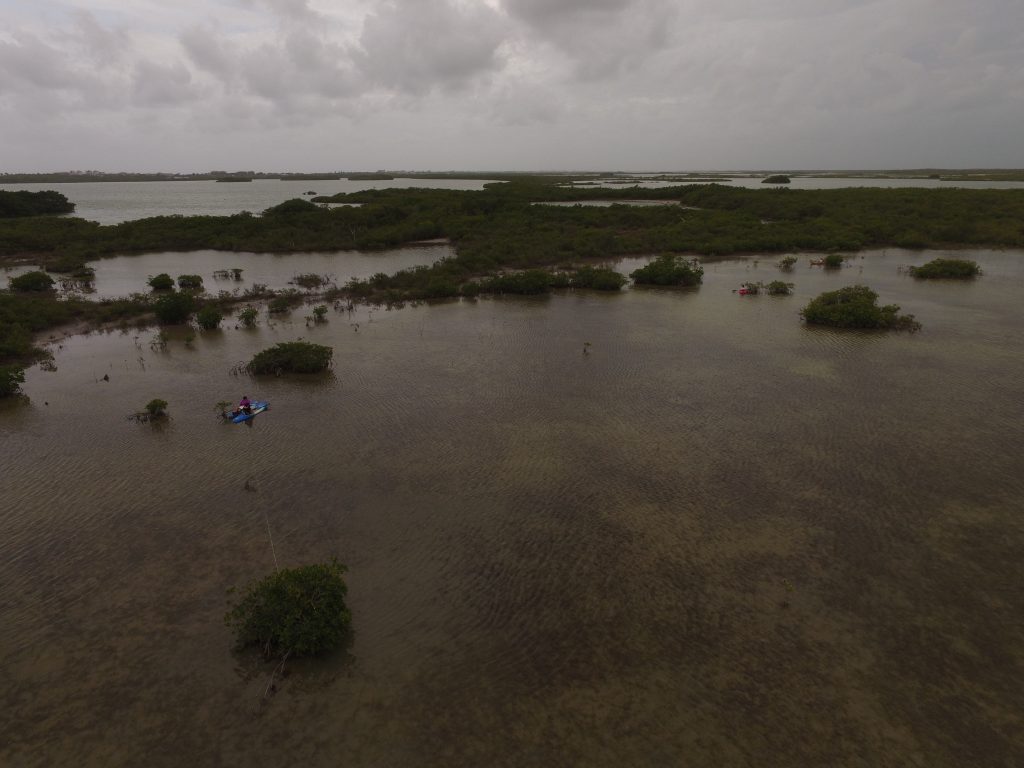 Students on kayaks taking samples in the mangroves

The Mexico rocks flight proved much trickier. Nearly every day that I was there, the winds over the ocean were just too strong to fly a drone (usually 18mph is our limit).  On the last day I was there, David, Denise, and I caught a 6:30am water shuttle from our hotel in San Pedro to the Mexico Rocks area.  While the wind was calmer than it had been, it was raining out, which also prevents drone flying. After waiting for about an hour, the rain finally stopped.  We quickly prepared for the drone flight and captured some great imagery of the area.  Just as I landed the drone after the final flight, the wind picked up again. We were very thankful to have caught this narrow window before I returned to Northampton with the drone! 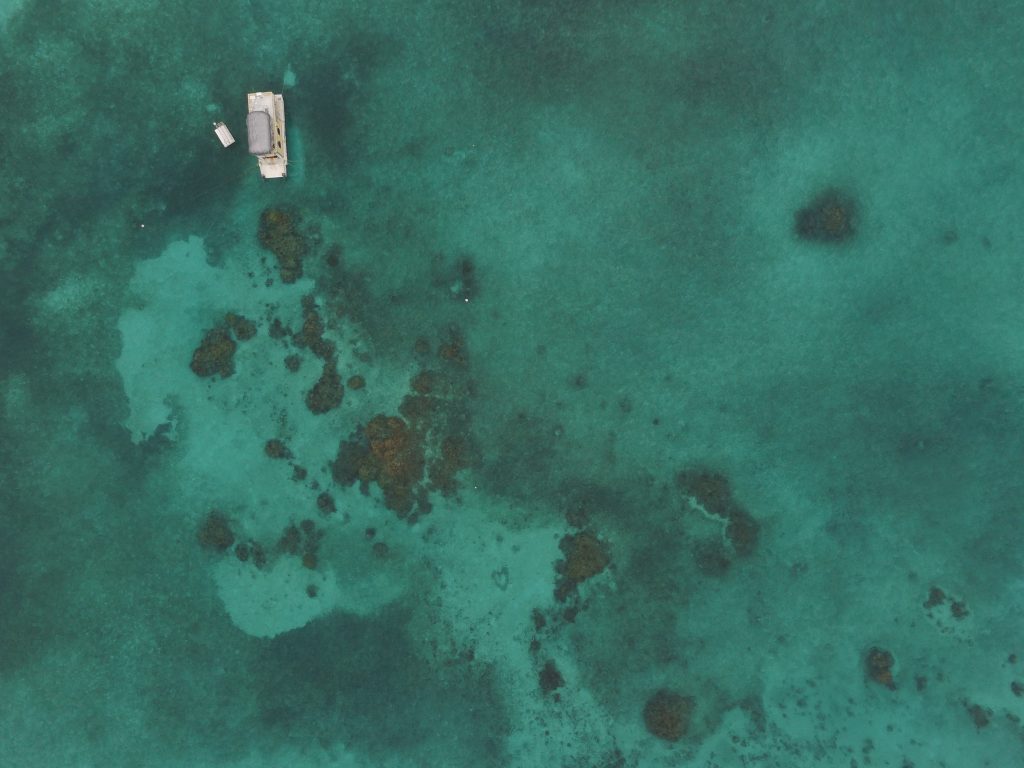 Several coral mounds in the Mexico Rocks area with a SNUBA boat (don’t ask) in the upper left corner. Taken from the air with a drone.

After the Mexico rocks flight), we headed up to an area called Belizean estates to get some bonus imagery.  This 2-acre area in the middle of Amergris Caye’s mangrove forest was leveled and divided into housing lots nearly a decade ago.  Since then only about 3 lots have been developed (from what we can tell), and the rest are slowly returning to the mangrove forest.  It’s a very cool but eerie place to visit! 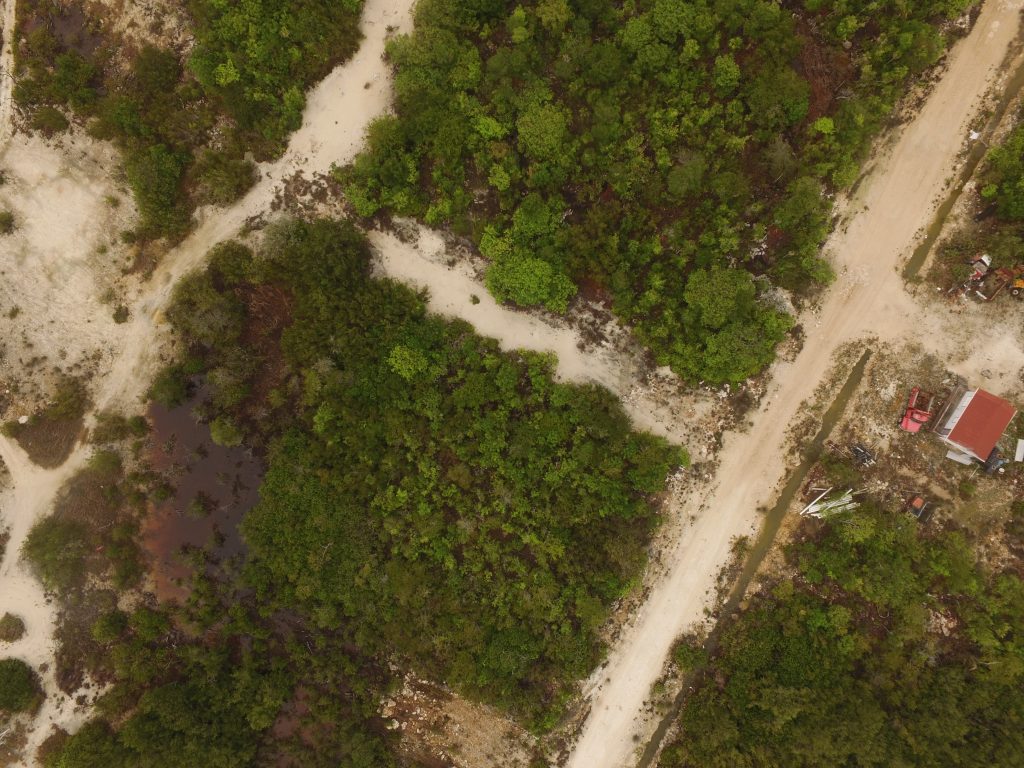 A house in Belizean estates surrounded by vacant lots

Of course, my journey in Belize was just the start of our adventures with this imagery.  David plans to use the imagery of Mexico Rocks to get more precise locations for the mounds that he and the students surveyed.  He also plans to use the imagery next year to develop a more systematic procedure for determining which mounds to sample.  Denise plans to investigate how currents in the lagoon affect the growth and reproduction of mangrove trees, with the ultimate goal of shedding light on how the many hydrological changes happening in the lagoon (for example, filling in 200 acres for a non-existent subdivision) may impact the area’s ecology.  Finally, I hope to use the imagery of Belizean estates to tell its story from an environmental history perspective – how the development was informed by the narratives we weave about nature,  and how nature resists our narratives.