What do the eleven orange states have in common? 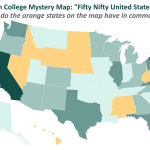 There are no students in the Smith College Class of 2016 from any of the orange states (Alabama, Delaware, Hawaii, Idaho, Mississippi, North Dakota, Nebraska, Nevada, South Dakota, West Virginia, and Wyoming). The map below shows the number of 2016 Smithies from each state, with darker green corresponding to more students. The five most heavily represented states among this years’ first-year students are Massachusetts, New York, California, Connecticut, and New Jersey.

Congratulations to Lillian Nosow ’15, who correctly identified what the orange states have in common and the five states with the most first years while setting a Mystery Map record — she figured it out just 10 minutes after the map was announced in the E-Digest! 10 more people submitted correct answers, and nearly 150 people viewed the map this month. 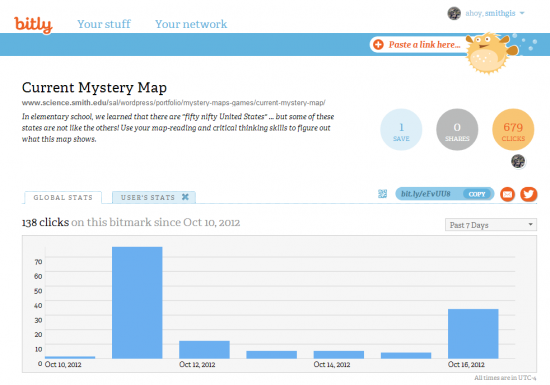 Now that you know what mystery variable is shown on the map, take a minute to explore the interactive interface. What geographic patterns exist among the hometowns of the first year class? What percentage of this year’s class (642 people total) is from New England?

*Only members of the Smith College community are eligible to win prizes.

The first person to correctly guess each month’s mystery map can choose between: