The April 2012 Mystery Map reveals monetary contributions to David Narkewicz and Michael Bardsley during the 2011 Northampton Mayoral Campaign.  The points are located at the contributor’s address and sized proportionally to indicate the amount of contribution.  Each point is color coded by candidate: Narkewicz is light green,  Bardsley darker green. 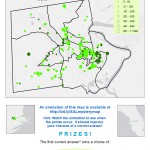 And, the winner is…. Sam Masinter, Director of College Relations.   Sam submitted the correct answer on April 9th (4 days after the Map was released in the wild).  Marc Anderson,  I & T Instructor in Chemistry solved the mystery a few days later.

Over 300 detectives viewed the Mystery Map

How was it Done?

To make the mystery map of the 2011 Northampton Mayoral Election campaign finance data, we first found David Narkewicz and Michael Bardsley’s campaign finance reports. We transcribed the data from the Receipts (regular monetary contributions) and the In-Kind contributions (the value of campaign activities and expenses). These data was formatted onto an Excel spreadsheet; the Narkewicz data, which had been typed, could be copied and pasted into an Excel spreadsheet after using Adobe Reader to convert it into a Microsoft Word document. The Bardsley data had been handwritten, and needed to be transcribed and typed into the spreadsheet. These data were organized by:

The data were then imported into ArcMap and geocoded to map the addresses of those who donated to each campaign.  Some of the map locations were approximated due to differences in base map and address locators.  Data from P.O. Box addresses were not be mapped.  We then displayed the data by size of contribution, sizing the points in relation to one another across campaigns by normalizing the value ranges. The data were then animated through time by contribution date, and exported into a time-enabled Google Earth format.

Mapping the campaign finance data suggested how closely connected contributions and electoral success may be.  The election outcome, where David Narkewicz won 70 percent of the vote, paralleled the greater amount of money and in-kind contributions donated to the Narkewicz campaign ($48,190.55 from 256 contributions compared to Bardley’s $25,573.99 from 87 contributions, $11,720 of which Bardsley contributed to his own campaign).  Animating the contributions revealed that there were specific days, such as 4/26 and 8/17 for Bardsley’s campaign and 5/19 and 9/8 for Narkewicz’s campaign, where many contributions came in at once, suggesting that there were specific efforts to raise donations on those days.  Although the majority of contributors reside in the Northampton area, there were interesting outliers showing contributions from further locations like Florida and Maine, suggesting the role of friends and relatives in supporting the campaigns.  Or, was there a national advertising effort ? 😉

The data are available in GIS format should other wish to explore.