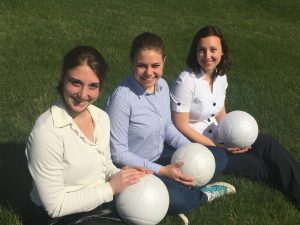 2015-2016: In collaboration with Under Armour and PSI91, this student team designed a novel soccer ball for use in international match play to help launch Under Armour into the global soccer market.

The team completed an in-depth literature review of existing soccer balls and performance studies, using this information to establish design requirements for their novel ball. In particular, the team decided to focus on providing a unique panel design that promoted a high degree of predictability for players. The team generated multiple design ideas and had selected designs prototyped at one of PSI91’s contract manufacturers. The team tested these prototypes experimentally in a wind tunnel and on the field with soccer players. The team then compiled a set of design guidelines for soccer ball panels based on performance data and manufacturing constraints; from these guidelines, the team developed their recommended final design.

The team delivered their design guidelines and prototypes of their recommended design to their Under Armour and PSI91 liaisons for further user testing, wind tunnel testing, and potential kickbot testing before it can be confirmed by FIFA and commercially marketed by Under Armour.