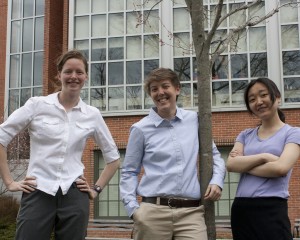 2012-2013: In collaboration with the MITRE Corporation, this student team developed an algorithm to detect targets using data from a passive bistatic radar system.  Radar technologies have the potential to be an integral part of building security and surveillance.

After gaining a foundation in radar data and processing techniques, the team developed an initial algorithm to identify targets in a range-Doppler map from simulated pulse data.  The team then modified their algorithm to process simulated 100% duty-cycle data on specific scenarios the team created.  The refined algorithm processes the data using pulse compression, fast-Fourier transforms, and a two-pulse canceller. Although still early stage, this algorithm can successfully remove clutter and detect targets.

The deliverables for this project included the team’s final algorithm, the results of algorithm implementation on specific data sets, and a user guide describing the code’s functionality.  This algorithm will be added to the development suite of MITRE’s eXperimental Radar (MXR) program for further refinement, testing, and eventual implementation in security applications.