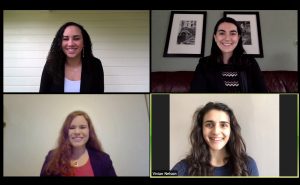 2019-2020: In collaboration with personnel at Simpson Gumpertz & Heger (SGH) and Goody Clancy (the architectural firm representing the client) the student team investigated the issues an historic church was having with plaster damage and deterioration. The lath and plaster ceiling in the church is incurring damage to the plaster keys on the attic side of the ceiling due to among other things workers accessing the space, and subsequent vibrations induced in the structure is causing the damaged plaster to further deteriorate to the point that small portions of the ceiling are falling into the church.

The team developed a design for a netting system to limit access in the attic space to the walkways, and to keep tools and other items from falling onto or being set upon the backside of the plaster ceiling. They also tested several materials that could be placed on the walkway surfaces to dampen out the vibrations caused by workers using the walkways. The team built physical prototypes of portions of the walkways in the lab and conducted impact testing on the prototypes with and without the proposed damping materials.