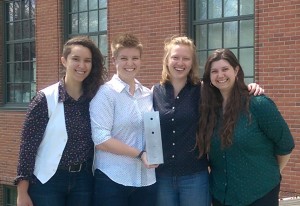 The team conducted a thorough review of current flow measurement technologies and narrowed the list based on the design requirements that the team had determined from key stakeholder needs. Based on the viable technologies, the team then generated and evaluated multiple concepts for the device, ultimately selecting a concept based on force sensitive resistors (FSRs). The team completed multiple phases of prototyping, each increasing in complexity, refining the design at each phase. The later prototypes incorporated commercially available FSRs from a potential manufacturing partner. The team’s final design demonstrated proof-of-concept for measuring low flows in pipes; additional work is required to ensure desired performance and integration with the existing vortex flow meter.

The team delivered a CAD model and drawings of the proposed next prototype, a cost estimate, an initial error investigation, and recommendations for future development and verification to their liaisons at Schneider Electric.