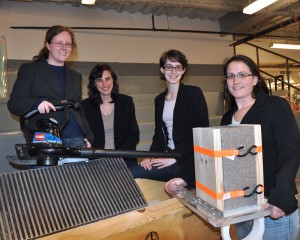 2012-2013: In collaboration with United Technologies Aerospace Systems (UTAS), this student team analyzed fin behavior within aircraft heat exchangers and redesigned the current retrofit that UTAS uses to prevent fin damage.  The motivation for this project was to predict when fin erosion could occur under different airflow conditions and to design heat exchangers to reduce the likelihood of damage.

The team developed a model of the heat exchanger in SolidWorks and used computational fluid dynamics (CFD) to analyze the effects of temperature, mass flow rate, and pressure within the operating range of the heat exchanger.  To validate the CFD analysis, the team built a physical test set-up of a partial heat exchanger and simulated air flow using a leaf blower.   Using finite element analysis, the team determined the necessary conditions to permanently deform the fins, and compared the results to those from the CFD and physical testing.  In parallel, the team developed and evaluated several redesigns of the UTAS’s current fin retrofit to reduce weight and manufacturing time without sacrificing fin protection.

Ultimately, the team concluded that pressure difference across the fins is not the primary factor causing fin damage.  The team recommended higher resolution CFD modeling with additional physical testing to determine the root cause of the fin damage.