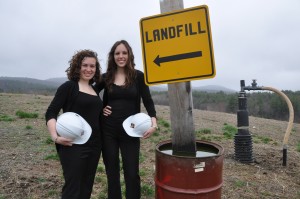 2010-2011: In collaboration with the Northampton Department of Public Works and the Northampton Energy and Sustainability Commission, this student team evaluated the feasibility of wind, biomass crop, and solar energy on the Northampton landfill after its projected closure in 2012.  The drivers of the project were income generation for the City and a local renewable energy source in support of the Sustainable Northampton Comprehensive Plan.

The team reviewed similar successful renewable energy systems locally, analyzed the efficiency and feasibility of all three options at the landfill site, and identified potential benefits and risks of implementation.  The team determined that wind energy was not an economically viable option because typical wind speeds were not sufficient to generate significant power output.  Biomass crops were also not feasible because the planting, harvesting, and root growth patterns would put the landfill cap at risk.  Solar energy is the most feasible and profitable option: per the team’s initial design, a fixed-tilt array covering 19.1 acres with less than 5% annual shading could generate 4.7 million kWh of energy annually, powering nearly 50% of the City’s electricity consumption.

The team presented their economic analysis and design in a public meeting.  The team’s work informs the City’s decision-making process regarding the landfill property.