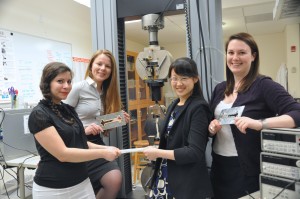 2011-2012: In collaboration with Protopeutics, this student team improved and characterized the design of a high-elongation strain gage.  The application is in the field of dermally-applied sensors and treatment in outpatient rehabilitation; the goal is to record range of motion data over time to inform medical decisions.

Building on Protopeutics’ initial strain gage of an elastomer pouch containing a conductive solution, the team first developed a method to fabricate strain gages with the desired reproducibility rate.  In addition, the team explored and evaluated design improvements in three areas: physical, chemical, and electrical.  These design variations included elastomer material and geometry, electrode placement, solution conductivity, and circuit design.  Based on test results and repeatability, the team selected the most effective combination for the proposed strain gage design.  Through subsequent experimentation, the team then characterized this design under both static and elongation conditions.  The team developed an algorithm that converts a measured resistance value into an elongation, thus verifying the physical prototype as a viable strain gage within a defined performance window.

The team’s work during this project provides a proof of concept design for a high elongation strain gage and lays the foundation for future expansion of functionality.