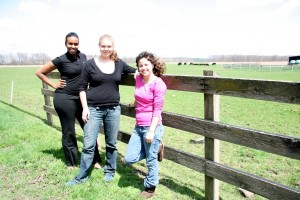 2006-2007:  In collaboration with Fuss & O’Neill, this student team designed the integration of a fuel cell and manure digester on a Connecticut dairy farm to create electricity for the farm’s needs.  The dairy farm had previously installed a manure digester and a bioprocess generator, but the digester did not produce sufficient methane to fuel the generator so the system never functioned properly; generation processes were later abandoned.  UTC Power proposed to install a derated fuel cell on the farm that would match the methane production, serving as a demonstration project for fuel cell electricity production on farms.

The student team reviewed the current site operations, evaluated the existing digester and piping, determined necessary operating conditions and production capacity, selected new components such as the scrubber and additional piping, and designed the integration of the digester/fuel cell system.  To document their work, the team prepared a process flow diagram and site plans for the proposed design.  The final design exceeds the farm’s electricity needs even at peak times and enables the extra electricity to be sold back to the grid.  In addition to the technical design work, the team also evaluated the financial viability of the project, determining the amount of grant funding necessary for the project to proceed.