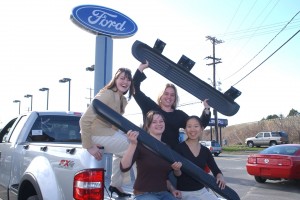 2004-2005:  In collaboration with Ford Motor Company, this student team evaluated whether blow molding was a viable manufacturing technology for producing running boards on Ford’s F-series pick-up trucks.  Blow molding has become popular in recent years because it reduces the number of parts required as well as total product costs. Blow molding enables the benefits of recyclability and weight reduction, but is limited by mold complexity and difficulty controlling wall thickness. Ford currently includes blow molded running boards on the Ford Escape.

The team was charged with designing a blow molded running board that was visually analogous to the current available injection molded running board on the F-150 truck, would meet Ford’s structural requirements, and both cost and weigh less than its injection molded counterpart. Using the SolidWorks platform for CAD modeling and finite element analysis, the team pursued a series of design iterations focusing on the ribbing patterns underneath the board. In this first stage of a two-year project, the team developed a design that met Ford’s criteria for structural performance, cost, and visual appearance, but exceeded the weight objective. In addition, the team developed a number of recommendations for potentially reducing the weight of the board such that another design team could continue the project.