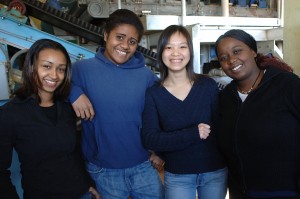 2005-2006: In collaboration with GE Plastics, this student team improved the design of the dewatering and conveyance system used for wastewater treatment in GE’s Ottawa, IL facility to minimize water usage and reduce waste disposal costs at the plant.  The belt filter press in use at the facility removed water from the waste sludge, creating a compact solid called filter cake.  The filter cake was then transported to waste-disposal hoppers by a pipe-based conveyance system. This process was inefficient, since water had to be re-added to the filter cake to allow for ease of movement in the conveyance system.

The team’s analysis revealed that alterations to the belt filter press would produce minimal change to the dryness of the filter cake; hence, they recommended dewatering devices, such as the J-VAP and Geotube, as alternatives for the belt filter press.  Additionally, the students designed a screw conveyance system to replace the current pump and pipe system and created static and dynamic models to illustrate the improved design. The team compiled a detailed cost-benefit analysis of the current and new systems, revealing that the new system would pay for itself in the first two years of operation.