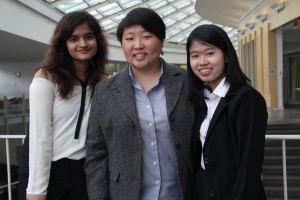 2013-2014: In collaboration with the MITRE Corporation this team designed a radar and signal processing system to determine the population of bat colonies accurately and precisely.

Bats are considered an indicator species, meaning that the biodiversity and health of an ecosystem can be estimated by the health and size of the bat population in the vicinity. Commercial agriculture gains massive benefit from bats as well because many bat species rely primarily on insects for their diet. Bats are important, but determining bat population is a complicated process because bats are small and they appear primarily when visibility is low. To address this problem a radar detection system was designed to count bats as they leave their den in the evening. The team first built the requisite background in radar system design by studying the relevant mathematical relationships among different radar and target parameters. They developed requirements for the signal processing needed, including pulse compression and Doppler processing. During the spring semester the team developed and refined a radar design using a Blake Chart and then tested the final design with synthetic data. To conduct these tests they started with MATLAB code provided by MITRE and modified the code for the specific application.

In their final report, the team provided to MITRE for further development their conceptual radar system design and modified MATLAB code.