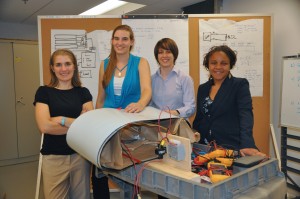 2011-2012: In collaboration with fourteen engineering students at the United States Naval Academy (USNA) and with support from the Department of Defense, this student team designed and built an easily deployable and portable water purification system for use by U.S. Navy expeditionary units.  The project was divided into five sub-systems, each developed in parallel by a small team; the Smith sub-team was one of two teams responsible for designing the power system.

The Smith sub-team evaluated multiple renewable and non-renewable power options and ultimately selected a combination of photovoltaic solar panels and pedal-power generators to be run in parallel with the wind turbine chosen by the other power sub-team.  The Smith team designed a modular and standalone power system to meet the power requirements for water purification and delivery via air drop.  The team prepared the circuit design for flexible solar panels and pedal-powered generators, plus batteries, a charge controller, and an inverter.  The team then designed and fabricated a frame for one module of the PV system, including a tilting mechanism for optimal solar positioning and an attachment mechanism to the two shipping containers.

While the overall system was originally intended for Navy troops, a renewable energy powered water purification system has many potential applications throughout the world.