Variations in Fault Dip along the Banning Fault

Using the SW model, the dips of all fault segments were then set at 90˚ (default and standard strike slip dip), 25˚ and 45˚ (to test varying dips for thrust faulting). 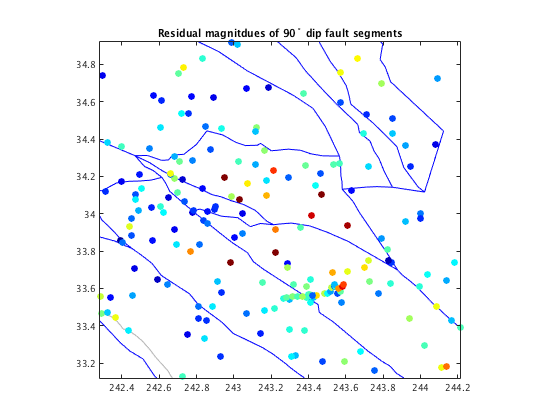 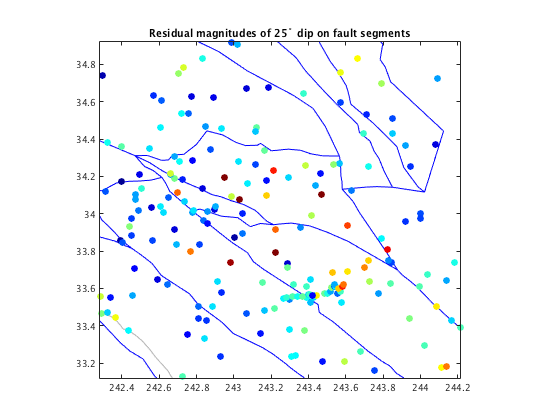 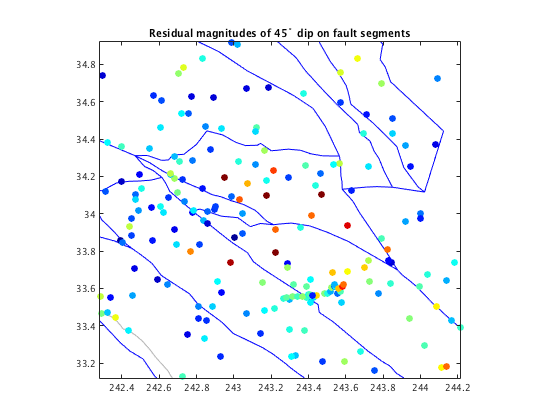 The residual magnitudes of each run suggest that the western most segments produce the smallest values for residual magnitudes when the dip assigned at those faults are 90˚ (strike slip). Perhaps this is due to the fact those westernmost faults are quite distanced from the heart of the thrust fault and is close to the strike slip faults lining the San Jacinto block boundary. And because faults tend to take on the characteristics of those nearby (and because the dominant motion among the San Andreas is strike slip), these edge fault segments could be strike slip. As for the opposite end on the Banning fault, the residual magnitudes for a 90˚ as well as a 45˚ show favorable results, however knowing that the Banning fault is a right lateral strike slip fault, especially concerning how far those particular segments are located from the thrust fault, the 90˚ dip scenario is probably more plausible. As for the complex central region of the study area, it seems to show the best approximation of GPS data when the central fault segments are set to 45˚. A couple of models have been run with varying degrees of dip in the central thrust faults, as well as the San Bernardino segments just north of the center, but there has not been much improvement in GPS approximations. This could be due to the contact between the San Bernardino fault segment and the San Gorgonio thrust fault.

Future runs will venture in exploring more along the central region of the study area.