As part of our work in the Spatial Analysis Lab, we like to check the accuracy of our equipment by testing it ourselves. We have the opportunity to use new and interesting technology such as new GPS equipment, but we want to assure the quality of our results. Thus, we tested and evaluated the benefits of using differential correction on our Bad Elf GPS devices.

All of our modern tracking devices use the Global Navigation Satellite System (GNSS) to locate ourselves geo-spatially, such as our GPS’s. However, time lags occur due to our atmosphere, the accuracy of our location can be up to a meter off. Using other methods such as including Real-Time Kinematic (RTK) positioning, we are able to receive highly precise locations that can have an uncertainty down to 1cm in accuracy. One such device that uses that method is NTRIP (Network Transport of RTCM via Internet Protocol), which uses WiFi to transmit positional corrections to our GPS’s almost instantaneously. Once a user has access to an NTRIP device, they can access the positional corrections in real time to make sure their GPS signal is accurate. This can be used for research when locating exact locations, and can also be used in the military or for a variety of other purposes.

Fortunately, Smith College has access to a Continuously Operating Reference Station (CORS) and thus can measure positions accurately across campus. However, since NTRIP is reliant on a user having WiFi, we wanted to test what the effects of walking around different environments would do to the accuracy of our positional correction data. Different environments would include being in a forest or surrounded by buildings, which can make the data from NTRIP harder to obtain due to such obstacles. Thus, I used two different Bad Elf GPS devices and took a walk around our Smith Campus to evaluate the successes and drawbacks of NTRIP based on one survey. One of the GPS devices had NTRIP turned on for instant positional corrections, and the other didn’t. The results of my walk can be seen in figure 1. 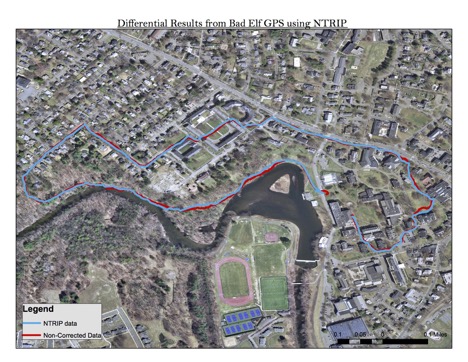 Figure 1: This figure provides an outline of the excursion with the Bad Elf GPS devices around the Smith College Campus. The blue line represents the data that used the NTRIP correction, while the red line shows the GPS data without the instantaneous corrections. The scale bar is shown in the bottom right of the figure.

As shown in the figure, the data between the two GPS stations is fairly similar, with differences between the GPS tracking. When looking at large scale events or needing to use Google Maps to get directions, using NTRIP data isn’t necessary, since the accuracy of GPS with the correction is high enough to allow for a safe passage. However, once zooming into the excursion, certain patterns are noticed that demonstrate the significance of accuracy differences on a micro scale. These differences are shown in Figure 2 and 3 below. 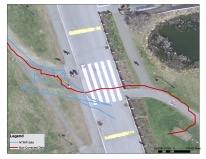 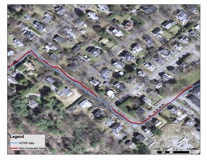 The two images above show some minor differences between the NTRIP and non-NTRIP data. On the figure to the left, these NTRIP data seems to have some severe inconsistencies, and this was due to a difficulty in transmitting the differential GPS data to the Bad Elf device, and thus kept moving around. On the figure to the right, this is an example of where the NTRIP data was more accurate than the non-NTRIP data. The blue line follows the sidewalk more closely than the red line and weaves in and out of the road and front lawns, which I was not doing when going on this excursion.

The NTRIP data did much better at recording data in all of the environments and in particular in residential neighborhoods. As shown in figure 3, the non-NTRIP data weaved in and out of the road and front lawns, as opposed to staying on the sidewalk like the NTRIP data did. These are minor differences that make the NTRIP data more ideal when requiring precise results.

Overall, the NTRIP data provides much higher precision than the non-NTRIP data, however, this high resolution in accuracy may not be necessary for day to day life activities such as going on walks, but provides valuable insight to our data when conducting research.