These three time-lapse maps show the evolution of state legislation on three hot-button issues: marriage equality, medical marijuana, and commercial casinos. These three issues have been on ballots all over the country in the past decade, and have more in common than originally meets the eye. All three are currently legislated at the state level; the federal government leaves it up to each state to decide the legal standing of same-sex marriage, marijuana, and gambling, as well as how to impose regulations on these issues (e.g. ballot measure, law passed through state congress, etc.). In addition, these three legal areas have tremendous economic potential for states– each has a significant indistry associated with it, and states that have legalized same-sex marriage, marijuana, and gambling are reaping tax and job-creation benefits. Finally, for each of these issues, the primary argument against legalization is moral or cultural.

Have you heard the phrase “the political landscape”? Often, this phrase is used to refer to the current state of politics, with only the slightest emphasis on geography/regionalism, as in this article: The Political Landscape after 2012. But the word “landscape” also has a deeply geographical connotation: landscapes are a marriage of physical and cultural features that vary from place to place: mountains give way to plains, rural agriculturalism becomes hip urbanity, and historic landmarks intermingle with new architecture. Just as these are all significant characteristics of  landscapes, so is the spatial patchwork of predominant political beliefs. Maps provide a way to integrate this geographic interpretation of a landscape with the the political application of the term that is so in-vogue right now. These time-lapse map animations, which we made by importing a simple Excel spreadsheet of dates to ArcGIS and using the native time-animation function in the program, capture momentum and change in America’s political landscape for three issues that are really gaining popularity.

Congratulations to Chris Gentes, who guessed all three maps correctly within an hour of the competition being announced! Wow! Chris is a four-time winner in the Mystery Map game.

Here are the maps again:

Check out California in 2008: it turns purple (marriage) for a few months, then suddenly switches back to blue (domestic partnerships).

Massachusetts, which has now legalized all three of these controversial measures, was the first state to legalize same-sex marriage but the last state (to date) to legalize commercial casinos and medical marijuana, with the medical marijuana law being approved by voters in the November 2012 election.

For this one, the fact that Nevada is the only stae shaded on the map for nearly 60 years should have been a clue, as should the appearance of New Jersey. Las Vegas (NV) and Atlantic City (NJ) are two of America’s legendary gambling and casino hotspots.

For the data hounds among you, here is a graph of Mystery Map views for the month of December. 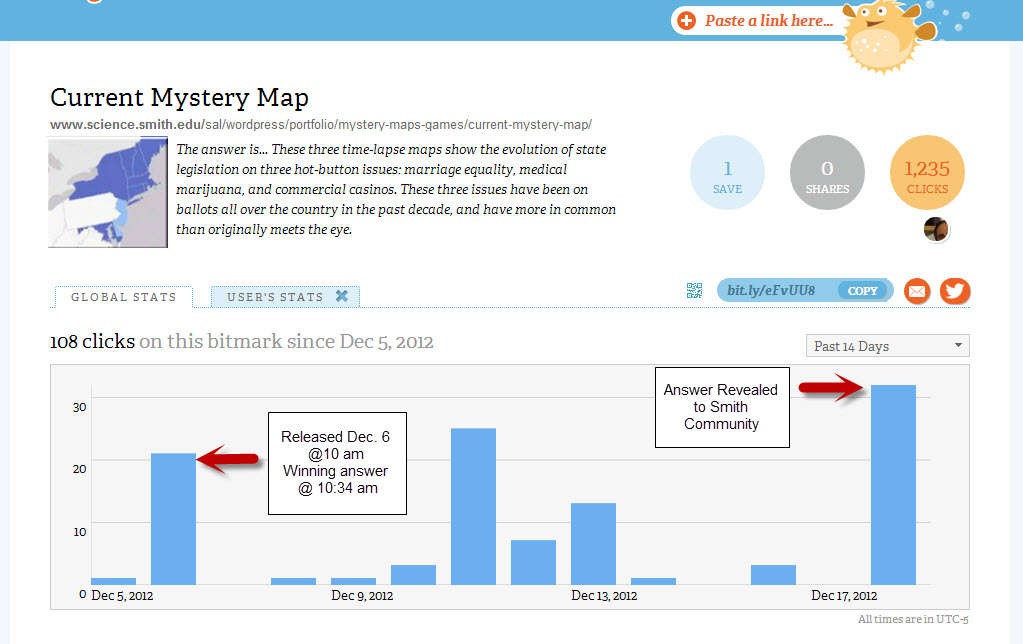