Global climate change severely affects and threatens marine invertebrates in different yet simultaneous ways. Understanding how and in which conditions corals survive or die enhances our understanding of the biology and factors driving stress tolerance to aid in reef restoration. Restoring and rehabilitating reef systems provides significant economic revenue (increased (eco)tourism and recreation), habitats for fish, and coastal protection for communities, among several other benefits. However, effective restoration is limited by gaps in our understanding of the various ways climate change affects reef-building corals.
Sea anemones are model organisms for reef-building corals, which are critical to healthy and productive oceans and sea life. Model organisms are species that are easier to maintain and breed in labs and are studied to understand specific biological phenomena. Much like corals, Exaiptasia pallida is a zooxanthellae species and has a symbiotic relationship with dinoflagellates, a microbe, making it an excellent proxy for corals, which are harder to maintain in the lab environment. In our lab, we will be using the sea anemone E. pallida as the model organism to explore cnidarian–dinoflagellate symbiosis.
We will use anemones to investigate physiological responses to different stressors. These stressors can be: biological, such as predation or disease; physical, such as thermal stress or UV radiation; or chemical, such as increased ocean acidity. We are especially interested in the effects of multiple stressors at the same time. We will challenge the anemones with temperature and salinity stress as well as expose them to a bacterial pathogen. Then, we will measure physiological responses (symbiont loss or “bleaching,” antioxidant responses, death) to assess how well the anemones were able to withstand the challenges singly or in combination.

I will be studying the influence of climate-change associated stressors on reef holobiont health to demonstrate the importance of understanding the specific physiological changes that occur in response to environmental stress, using the anemone Exaiptasia pallida as a model system. This anemone is like a reef-building coral in that it hosts the same algal symbionts, but E. pallida can live healthily with (symbiotic) or without (aposymbiotic) the symbionts (Baumgarten et al., 2015; Roesel and Vollmer, 2019). I will capitalize upon this flexible symbiosis to investigate the role of the algal symbiont by comparing the responses of symbiotic and aposymbiotic anemone to individual and combined stressors. Previous work by Dr. Wright in corals indicates that the adverse effects of environmental stressors are not necessarily additive, but that an adaptation to one stressor may confer resilience against others (Wright et al., 2019). I will build on this work by comparing multiple stress responses across two symbiotic states to determine the contribution of symbiont toward holobiont health. Ultimately, this work leads to further understanding the genetic basis of possible cnidarian adaptability to climate change, and any steps we as a planet can take to help them. 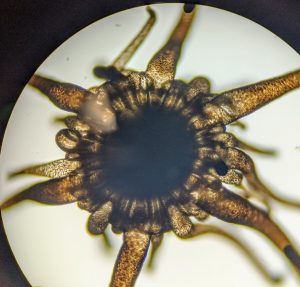