Catch up on the previous day’s events here.

5:30 wakeup, breakfast, and charging batteries: surely an ideal start to the first day of Spring Break.  Bleary-eyed and somewhat disoriented, our crew was still impressively on-time and packed up for our drive to the docks that morning.  By some miracle, we actually arrived early enough that we wondered whether we’d found the wrong dock, given that no one was there to meet us. 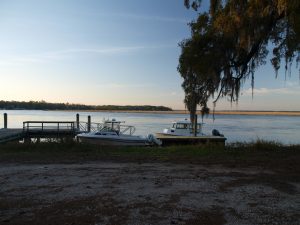 The boat crew soon showed up, though, and we loaded our bags and equipment into the bows of the two motorboats.  We paused for a quick group photo… 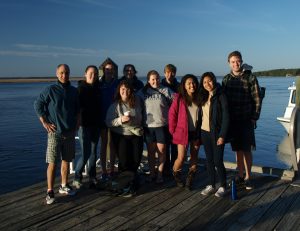 …and then we were off!  After we put-putted out of the no-wake zone, we were soon zipping along through a series of channels from the mainland to the island.  After about 20 minutes on the water, we arrived at a rickety dock, a result of Hurricane Matthew’s temper the previous fall.  We carefully unloaded our belongings from the boats into three Gators that the island staff had driven out.  We also met Jaynie, the Executive Director of the Sea Turtle Rescue Program and our official hostess for the weekend. 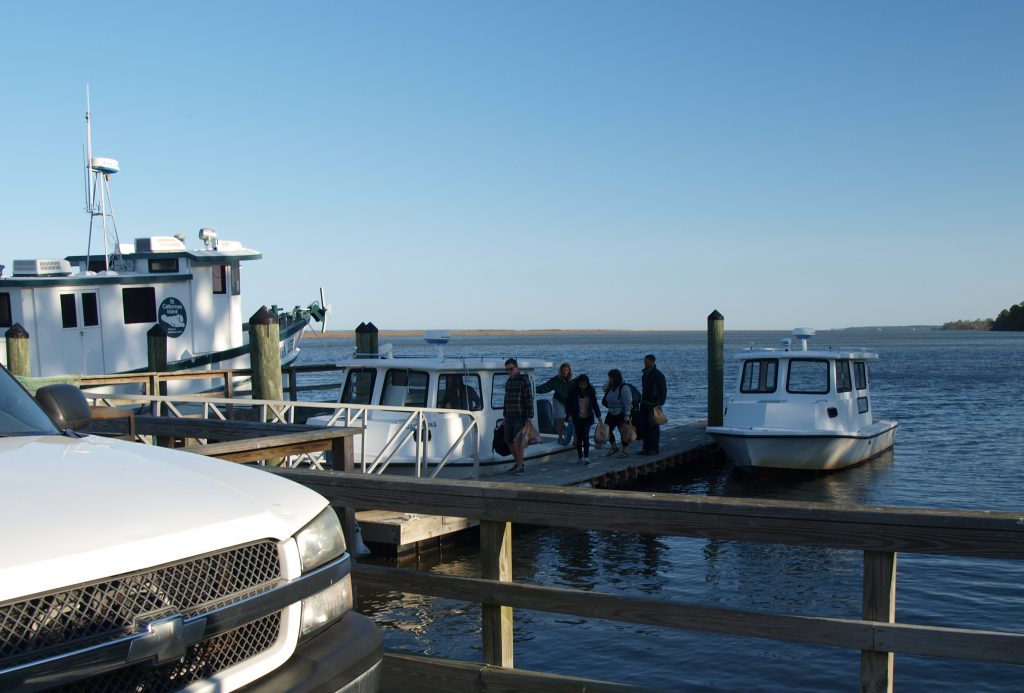 We then drove (or walked) the short distance to the mess hall in the center of the island compound, and encountered our first lemur on the roof of one of the buildings we passed.  We learned later that St. Catherines is home to the only other free-range population of lemurs outside of Madagascar, due to an agreement with conservation efforts there. 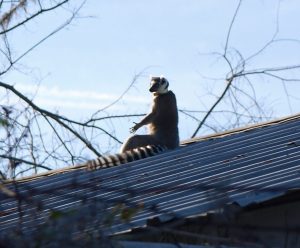 As we approached the mess hall, we met our contact on the island, Princess Aliyah, and her associates from the Kashmir World Foundation.  She welcomed us all warmly and showed us where we could store our food in the pantry area.  We unpacked our groceries, and then proceeded to follow Jaynie to the renovated cabins on the northern end of the compound, where we would be sleeping for the duration of our visit.  There were several ruins of old slave quarters by the cabins, a solemn reminder of some of the darker history of the island.

After settling into our rooms, we returned to the main part of the compound and situated ourselves in the small lecture hall to listen to a talk by Dr. Terry Norton, DVM, a local veterinarian, animal rehabilitation expert, and the Founder/Director of the Georgia Sea Turtle Center.  He discussed the various ecosystems present on the island, as well as some of the work that he has done to help rehabilitate injured gopher tortoises and introduce them to the island’s population.  We then got to witness the tagging and release of Roger, one such tortoise, who had had a close encounter with a fast-moving vehicle. 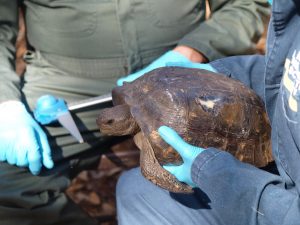 After obtaining Roger’s measurements and checking to make sure he was in good shape for release, we all piled into the Gators and drove out to the main burrow site to the north of the island.  We watched as Dr. Norton scoped out abandoned burrows for Roger, as possibilities for temporary homes to get him started as he established himself on the island.  Given the chance to examine a burrow for himself, Roger quickly dug into the ground and started renovating his new home.

Although we had hauled out all of the drone equipment to the burrows, we quickly realized that we needed to return to the compound before setting up any missions.  We needed the Wi-Fi connectivity to cache our maps as well as a lunch break to refuel before continuing on with our busy schedule.  We regrouped after a lunch break and piled back into the Gators, and then drove to North Beach at the very top of the island. 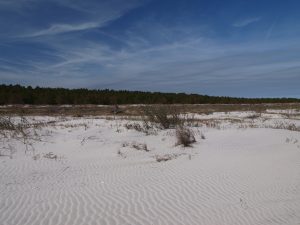 Nothing but sand and blue sky (and a brisk breeze) at North Beach this afternoon.

Our objectives for the afternoon were two-fold: (1) to get some good footage of our group flying, courtesy of Kate, our official videographer for the trip; and (2) to test out our ability to capture clear imagery of turtle tracks on the sand.  Although it was not nesting or hatching season for the turtles, Jaynie expertly mimicked some tracks in the sand for us to work with.

We spent a few solid hours on the beach, flying various missions as well as capturing some aerial videos during free flight.  The wind was starting to cool us all down a little too much, though, so we packed up our gear for the day and headed back to the compound for some pre-dinner image processing. 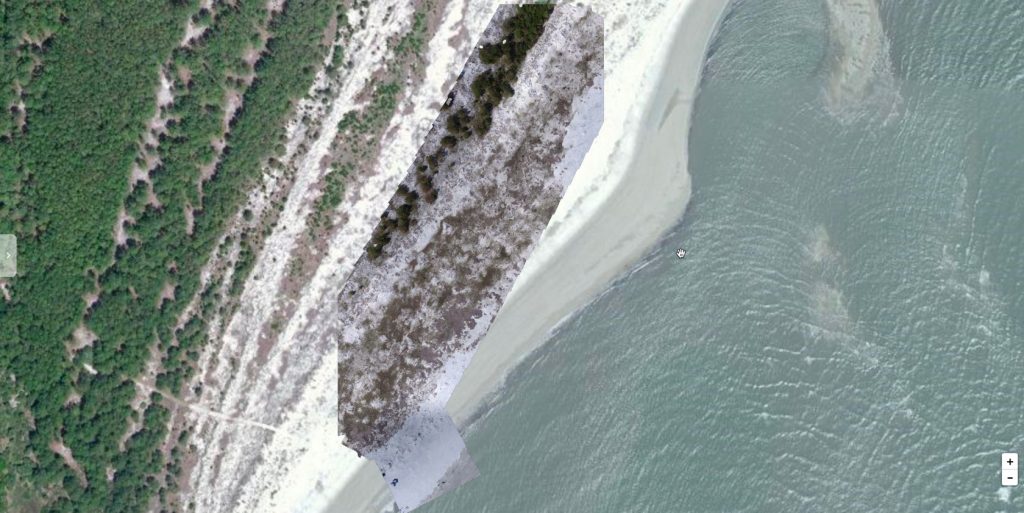 Some of the imagery captured from a mission flown at North Beach.

We stepped out from the mess hall briefly to capture some aerial video footage of the compound and surrounding area.  Our flying was short-lived, though, in the interests of not being eaten alive by swarms of gnats.  We visited briefly in the island’s mansion for refreshments and hors d’oeuvres before dinner, when we discovered at long last Scott’s reasoning behind his mysterious bags of chopped nuts: a delicious dinner of cashew burgers for the group.

Soon after, we all retired to our rooms for the evening.  As far removed from “civilization” as we were, all of the paths were well-lit by the moon overhead, even with some cloud cover; and the night itself was calm and quiet.  Settled into our beds, we all enjoyed a well-deserved rest before another packed day on the island.