As a brief prelude, the delay in writing this much-anticipated post stems from the fact that our travels to Georgia involved a lot more than any of us bargained for. It’s taken a couple weeks post-trip to relax, gather my thoughts, and even begin to think of how to summarize this adventure.

It all began just before 4 AM on Friday, March 10th, the ten of us straggling toward the loading dock of Sabin-Reed. Scott was as-yet-inexplicably toting several bags of chopped cashews, while Jon was handing out fortune cookies to the bleary-eyed crew.

We bundled into the van and made record time in getting to the airport, only to find some of the longest security lines I’ve personally ever seen at Bradley. Everything kept moving, though, and we made it through with minimal losses (in the form of a confiscated bottle of shampoo). We boarded our 6 AM flight with 15 minutes to spare and all settled into our seats, somewhat dazed, after shoving our bags into the overhead bins.

Fast-forward to just after 8 AM; we had landed without much ado in Raleigh-Durham, and felt that we needed the morale boost of some sort of food before making our way to the rental cars. Jon proclaimed to the Starbucks cashiers that he had just won the lottery, by way of explaining why he was springing for everyone’s breakfast.

After downing our coffee and bagels, we made our way to the lobby of the car rental company. We had a bit of a wait due to some confusion and technical difficulties with our reservation, but by a bit past 9, we were underway in our pair of minivans. We had high hopes that the 5-hour drive to Savannah, GA, would go smoothly, but between bathroom and lunch breaks, abominable traffic, and several re-routes, we felt lucky to arrive at our hotel just a few minutes shy of 4 PM, roughly seven hours later. 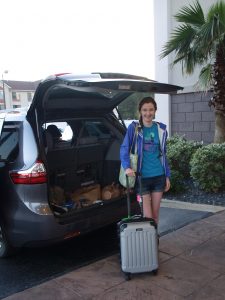 Emily getting her suitcase from the van (and expressing joy at finally being outside the van).

We unloaded the vans, temporarily collapsed on our beds, and regrouped to head to dinner. To our chagrin, upon taking the advice of the desk attendants and heading to downtown Savannah for dinner, we got stuck in even worse traffic that only further Google Maps rerouting could save us from. A 16-mile drive turned into 45+ minutes, but we toughed it out and found our way to a nice restaurant along the riverfront. We ordered five gourmet pizzas and a salad among us; hopefully I speak for all of us when I say nothing tasted better than a solid meal after a long, long day of traveling.

After dinner, we made it back to the hotel with thankfully less traffic than before. Although we were all about ready to pass out then and there, Scott, Jon, and Emily were super troopers and made one last run out to stock up on groceries for the days to come. I recall passing out just past 10, in the hopes of getting a few solid hours of sleep before a 5:30 wake-up to head to the dock and proceed to St. Catherines.