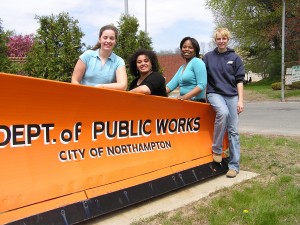 After analyzing multiple options, the team designed new drainage pipes and a new detention pond.  A detention pond is a stormwater basin designed to capture, temporarily hold, and steadily release a volume of storm water runoff to attenuate and delay flooding.   Using hydrologic modeling software, the students predicted their design will reduce water flow at the brook by 46%, which will eliminate the flooding problem.

The team’s final report to the DPW described the students’ analysis, recommended design, and cost estimates.  The team also presented their findings in a public meeting with the town of Northampton and incorporated their comments into their design.  The DPW plans to implement the team’s final design, pending funding.