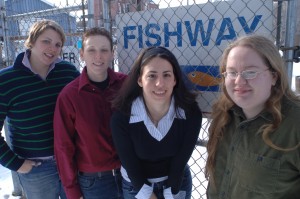 2005-2006: In collaboration with the Natural Resources Conservation Service (NRCS), this student team designed a fishway to restore access to spawning and rearing habitat for anadromous fish on the Town River in West Bridgewater, Massachusetts.  Many anadromous fish spawning runs located throughout the Northeast region of the United States, including eastern Massachusetts, have been lost due to the construction of dams that are impassable to such species as alewife. The installation of a fishway in War Memorial Park would provide access to the spawning pool since the park’s dam is the last barrier in the spawning run.

The team developed several fishway design alternatives and chose a three-foot Denil fishway as the most appropriate option.  The Denil fishway design was retrofit into the existing channel structure at the site and developed to function under the site’s specific water flow conditions during the spawning period.  The team developed construction plans, a specifications report, and an operation and maintenance plan and submitted them to the NRCS and the Department of Marine Fisheries.  Pending funding, the town may pursue implementation of the team’s design.