When researching Mount Graham, the site of the Mount Graham International Observatory, one figure seems to come up again and again. Opponents of the telescope state that in a study of potential telescope locations, Mount Graham was ranked 37th in the nation – not that impressive. Why was Mount Graham chosen to host this complex of telescopes in the first place, and why is it so controversial?

The original plans for the Mount Graham International Observatory envisioned a 3500 acre complex of telescopes covering much of the mountain’s summit, not including the additional facilities that would be needed for support of the telescope. Many agreed that the construction of the telescopes would almost certainly destroy the remaining habitat of the native Mount Graham Red Squirrel and other species found on Mount Graham.

Mount Graham is also a sacred site to the native Apache people residing around the mountain. In 1998, controversy erupted after Wendsler Nosie, an Apache man, was arrested by University of Arizona police after praying on Mount Graham. Soon afterward, the university requested permission from the US Forest Service to regulate traffic to the mountain, asking that anyone intending to pray on Mount Graham request permission at least two business days in advance. This request would need to include the exact location of the prayer site, and would only be granted to “bona fide Indians” who were part of a federally recognized tribe. This was a ridiculous request to make, and turned public opinion strongly against UA and the MGIO.

But why Mount Graham anyway? Isn’t it only the 37th best site in the United States? Well, in actuality, that number comes from a survey from the National Optical Astronomy Observatories which only examined topographic maps and didn’t actually visit the sites to assess seeing, precipitation, environmental impact, and other factors. Kitt Peak, for example, was ranked behind Mount Graham, at #59. In practice, Mount Graham is one of the best locations in the United States for optical astronomy.

Earlier today, the National Academies of Science, Engineering, and Medicine held an important meeting as part of the Decadal Survey on Astronomy and Astrophysics 2020. This process is conducted every ten years and incorporates all levels of the astronomy community, from senior professors to graduate students. This particular meeting, Optical Interference from Satellite Constellations (the itinerary can be found here), was held to discuss Elon Musk/SpaceX’s Starlink program. Starlink plans to launch around 12,000 satellites to help bring high-speed internet to the roughly 3 billion people around the world who currently lack internet access. With so many satellites planned, astronomers are concerned about the interference of the satellites with optical astronomy.
Some of us may have already seen pictures of Starlink satellites soon after launch, streaking across the sky in long-exposure photos of the sky (as shown in the photo below). The main reason for their brightness is their (temporary) low orbit – 280 kilometers, lower than the International Space Station. SpaceX places the satellites in low orbit at first so if any fail, they can burn up in Earth’s atmosphere instead of remaining as space junk. After the testing period is over and dysfunctional satellites have been removed, they move to a higher orbit and appear much fainter. So, problem solved…right?
Unfortunately, no. While the satellites already operating at these orbits don’t cause much trouble, the sheer size of Starlink makes probability a problem. 12,000 satellites is a lot more than ~70. One satellite is already difficult to remove from an image, and several at once (since Starlink satellites are clustered together upon launch) is another thing entirely. Telescopes are much more sensitive than the human eye, and while the satellites may not be visible to most of us in their higher orbit, they will certainly still affect telescope operations. SpaceX seems amenable to negotiations with the astronomy community, and Elon Musk himself was present at this meeting today. However, it seems unlikely that SpaceX will call off their program completely for the sake of the astronomical community. It remains to be seen the impact that Starlink will have on astronomy research in the long-term.

Just over a year ago, the results of the Event Horizon Telescope’s first project were streamed live from Washington, DC. The EHT used radio telescopes to observe the black hole in the galaxy M87. Radio waves can pass freely through Earth’s atmosphere, so there is technically no need to put them on mountaintops as there is with optical telescopes. However, anything in the vicinity of the telescope that produces radio waves in the wavelength range that the telescope can measure will interfere with the telescope, and mountaintops also tend to have the most of the sky visible (as in not blocked by trees or buildings), an important consideration for being able to observe anywhere in the sky. Because of these factors, most of the telescopes used in the EHT, including the JCMT in Hawai’i, ALMA in Chile, the LMT in Mexico, the SMT in Arizona, and IRAM in Spain are on mountains (you can see all the telescopes in the collaboration here).

Although not all of these mountaintop telescopes are the subject of conflict between native peoples and the researchers searching for the highest mountaintops and the best seeing, Maunakea, Hawai’i (where the JCMT is located) was in the news recently due to the reignition of protests of the construction of the Thirty Meter Telescope, an extremely large telescope which will measure in the near-ultraviolet, visible, and near-infrared.

The first telescope on Maunakea was built by astronomer Gerard Kuiper. He chose not to build on the highest peak of Maunakea because of its designation as holy ground, building on the second-highest instead. However, as the number of telescopes at this location has grown, so has the controversy surrounding them. Maunakea is great for observing because of its mountaintop location surrounded by ocean, but the same elevation that draws astronomers there makes it holy ground for the indigenous people of Hawai’i.

In the Hawai’ian creation myth, Maunakea is the Earth Mother and Sky Father’s oldest child. Within the Maunakea Science reserve, there are over 250 historic properties and almost 150 shrines to various Hawai’ian gods and goddesses. Accounts from 19th-century European and American visitors to Hawai’i say that their guides would not go near the summit of Maunakea. Over the last near century, these sacred ideas have been ignored over and over again as more telescopes have been built near the summit. It’s clear that Americans need to stop talking over the peoples of Hawai’i, and start listening. 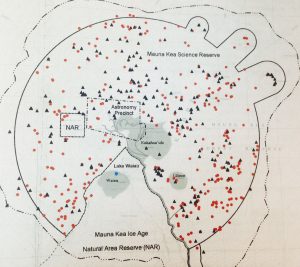 In the United States in particular, the coronavirus has uncovered many underlying issues with our government and healthcare systems that have been festering – underground or in plain sight – for decades. The US now leads the world in coronavirus cases by more than a factor of three. There are many reasons for this: the aforementioned broken healthcare system, an individualistic, freedom-obsessed culture, among others. However, I’m most interested in the role that the abject denial of science has played in the devastating effect of the coronavirus.

In working on our recent climate consensus homework assignment, I came across this interview with Naomi Oreskes where she speaks to a reporter from the New Yorker about coronavirus skeptics and ties it to the skepticism around climate change. I found that it really summarized a lot about what I’ve been thinking about the difference between the United States’ coronavirus response (particularly the federal government’s response). It could just be my lack of firsthand experience living through the coronavirus in any other part of the world, but it seems as though the United States is the only place in the world where this level of distrust in science and scientists is perpetuated from the highest levels of our government and magnified by the media spectrum.

While many mainstream media outlets appreciate the severity of the pandemic by encouraging people to stay at home, recommending masks when grocery shopping, and having their newscasters report from the safety of their homes, this is not the case across the board. Especially in March, during the early days of Covid-19 in the US, Fox News anchors actively encouraged people to leave their homes, applauding people like Oklahoma governor Kevin Stitt who posted a photo at a crowded restaurant with a caption telling people to “support local businesses!” The average age of Fox News viewers is 65, the demographic most in danger from the coronavirus and now simultaneously the least likely to heed the warnings from pandemic and virus experts – a scary combination. 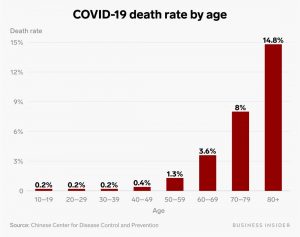 Is the Coronavirus really not as bad as the flu?

*this was written on April 5th*

When the first news about the coronavirus started to come in from China in late December and early January, I was definitely one of the skeptics. My thoughts were “everyone calm down, it’s not going to come to the United States, and even if it does it’ll be like Ebola or SARS where a handful of people will get sick and then that’ll be the end of it.”  I certainly changed my tune at the beginning of March when its foothold was fully established in the United States. But I’m not a biologist, nor an immunologist, nor an epidemiologist or anyone who can be reasonably expected to understand how exactly viruses work and why Covid-19 has proven to be so dangerous. What exactly makes it different from the flu, or other coronaviruses that cause the common cold?

Coronaviruses are a handful of viruses which generally cause respiratory infections in humans. These infections can range in severity from the common cold to SARS or Covid-19. According to the CDC, Covid-19 is actually less deadly than SARS, but it is much more infectious. Thus, coronavirus has already killed more than 100 times more people than died during the 2003 SARS outbreak (123,000 deaths vs 773). The world has not seen another outbreak of SARS since 2003, but that may not be the case for Covid-19 because of its increased infectiousness.

It seems that Covid-19 is so much more serious than any disease outbreak in recent memory because of its novelty and infectiousness. This is the same reason it is, actually, worse than the flu. Covid-19 can spread very easily from person to person, and once there the cells in our body don’t have a blueprint, like a vaccine, to follow in order to fight it. The bottom line? The flu has a death rate of about 0.1%, while Covid-19’s is more like 5%.