After more than a month of closure, Governor Ige of Hawaii has approved the gradual reopening of observatories on Mauna Kea. KITV Island News reported on the announcement, adding that a small number of essential staff members will be able to perform “nightly scientific operations at the summit.” The observatories are considered low-risk because they are remote and uncrowded. In general, the public seems to be in favor of the reopening; in fact, several articles arguing in favor of the The Thirty Meter Telescope International Observatory have published in the last couple of weeks.

The Thirty Meter Telescope will potentially be constructed on Mauna Kea as a neighbor to the preexisting observatories there, but its plans have received widespread backlash. Its giant size sets it apart from the rest. And most importantly, many indigenous Hawaiians think of Mauna Kea as sacred; eight months of protests have brought the controversy to the forefront. This article from the Hawaii Tribune-Herald notes that all protestors were asked to abandon the campsite and obey stay-at-home orders starting in March. However, about a dozen people remain camped at the access road every day. The comments on the report are overwhelming in favor of building the TMT and are aggressive toward the protestors (see images below). A blog post from the Tax Foundation of Hawaii ends with this charged statement: “Enough of this foolishness!  The protesters have concerns about the sanctity of Mauna Kea?  Their argument may have made sense if TMT were the first telescope on the summit, but it’s the 14th.  We have a government, we set up a process for approving the construction that included getting input from stakeholders… If they are hell-bent on stopping the telescope and are willing to go to jail for it, let’s give them their wish and haul them off.”

One factor to consider, however, is the reason behind the growing support. Almost all of the recent rallying cries for construction cite the need for economic revival as most important. COVID-19 has decimated the already-fragile economy of Hawaii, according to this op-ed from the Honolulu Civil Beat. The author lays out statistic after statistic about new jobs, gains to the economy, and other benefits of construction. In addition to statistics, I believe the recent quarantine and isolation has also strengthened people’s frustration and anger at the lack of progress. There is a widespread feeling of helplessness, but big projects that could revive an economy like the TMT bring hope. It is vital to make sure that the promise of money does not drown out underrepresented voices, however.

As I was recording my final science issue video about contested mountains, I realized that I wanted to research the stories behind sacred mountaintops in greater detail. I was sympathetic to indigenous people’s rights and beliefs, but I didn’t have the background to fully comprehend their perspective. Of course, I still cannot understand any of their lived experiences, but I am so glad that I was able to read some of these mountaintop histories.

One article by Rosalyn LaPier describes a belief of the Blackfeet: that deities are present in our universe, “unseen, but known.” Some of their dwellings welcome human interaction, and others do not. For example, a deity called Ksiistsikomm (Thunder) can be found on Nínaiistáko (Chief Mountain) in Glacier National Park. Human activity (including changing the landscape) on the mountain would desecrate the deity and their home. Thus, landscape and religion are undeniably connected in Native American cultures and faiths. 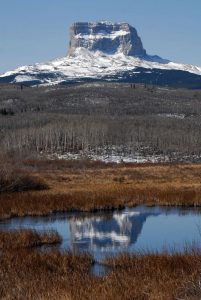 In the Pacific Northwest, Native American faiths see the humongous volcanoes as hosts for evil-spirited deities. Although outsiders occasionally trek up and down them (and survive), the mountains are still worthy of respect and awe. As the author of this article from The Clymb recounts, “With the world completely charted and all natural phenomena accounted for in our theories, it’s easy to forget that nature can be a sublime power beyond our comprehension.”

It is also clear that many Native Americans identify with being Earth’s caretakers. I learned that while several stories feature mountaintops, all of the features of a landscape—streams, fields, stars, the air, rocks, and every other natural element—are treasured. National Geographic ran a feature about the effect of climate change on Native American tribal land in the Sierra Nevada in 2019; this particular observation stuck out to me: “In a way, the Sierra Nevada is a microcosm of the planet: Within an area smaller than the state of Massachusetts are coral reefs, sandy beaches, deserts, rainforests, tropical dry forests, savannas, paramos, tundra, alpine lakes, glaciers—all connected in a seamless gradient of life-forms that seem to change with each upward step.” Native American cultures appreciate Earth as the single living organism that sustains us. Mountains aren’t necessarily special as a concept; they are sacred because they are connected to the ecosystem of the Earth. In fact, it’s an inextricable connection; the ecosystem below a mountain relies on the water flowing down it in order for plants, animals, and people to thrive.

I recently read this article from The Washington Post detailing the link between wild animals and global pandemics. The author states that we are seeing an increase in diseases that originate from animals, and humans are to blame. Wild animals have always carried sicknesses that could be harmful to us, but we increase the probability that we will catch them by engaging in harmful activities like urbanization and deforestation. Humans are too close in contact with wildlife currently. By invading their natural habitats, we are not only endangering the animals but also ourselves. And human society has become so globalized that a localized outbreak can easily turn into a global pandemic if it isn’t contained effectively. 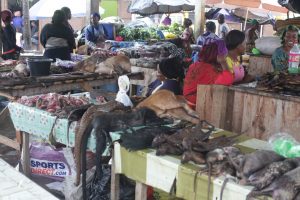 Exotic animals for sale at a wet market in Gabon (from The Washington Post).

Some people have suggested simply shutting down places where humans can have direct contact with wild animals, such as wet markets (one in Gabon is pictured above). However, I don’t think it’s as simple as a new law being passed. People need to understand humans’ relationship with wildlife, otherwise they will just try to fly under the radar and continue putting everyone at risk. For some reason, we often separate environmental conservation as a separate issue in our minds, when in fact it is related to every other action we take. When we plan for our new factories and fields, or when we are about to re-route a river to expand a city, we must take a step back and consider the effects our actions will have on our environment. We have to start thinking more holistically; “our” environment contains wild animals, trees and plants, sometimes buildings, and humans — but we are only one part of the much larger ecosystem that we must preserve.

I believe that integrating human and animal studies in education could be a great way to spread this sort of holistic mentality about the environment. After all, our actions affect all of the animals on Earth. There is a way to love animals and experience nature without abusing our surroundings. We need to work to make sure that everyone is dedicated to the safety of our entire ecosystem, including both humans and wild animals.