Everyone who has read any news article in the past two months knows that social distancing is an important step to prevent the spread of COVID-19. Without it, the virus would be able to spread more quickly and many preventable deaths would occur. This has led many cities to introduce regulatory laws on social distancing in order to discourage people from gathering in large groups. However, although the laws are in the interest of protecting public health during this pandemic, the ways in which they are being enforced are just another example exposing disparities between police treatment of white people and people of color.

This subject has been a topic of discussion since the laws first came into place, but the number of people talking about it has drastically increased after a series of events in the past week. On Saturday, May 2nd, the verified Twitter account ‘NYPD NEWS’ posted a tweet with a photo of a masked police officer handing another mask to a smiling white woman without one. The caption stated “No mask? No problem. This park-goer in Domino Park didn’t have a mask, no problem, our task force officers were more than happy to provide her with one.” 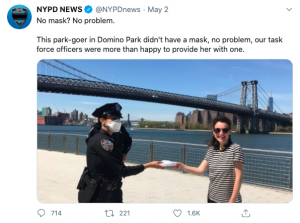 One day later, a video arose of a 20-year-old black man, Stephon Scott, and his friends being approached by police for ‘failing to social distance’. The confrontation led to him being assaulted by those police officers, who then arrested a person filming the scene. This was not an isolated incident: similar encounters have been reported in the East Village on May 2nd and again in Brooklyn on May 4th.