Jakarta, Indonesia is the second most populous city in the world and sinking at the fastest rate ever recorded. Comparatively, Venice, Italy, a prominent city in Western Europe is also sinking, and the world has been made aware of it. Venice particularly gets a lot of attention for the pictures that come out in the extreme flooding of the winter months as chairs in the central piazzas are submerged, and the raised platforms above the water swells come out; necessary infrastructure for Italians to continue about their daily lives. In the last century alone, Venice has sunk approximately nine inches, a considerable amount for a largely populated and economically proficient country with an emphasis on community and environmental issues.Meanwhile Jakarta, Indonesia is able to boast the sinking average of up to 25 cm a year compared to Venice’s mere 3 mm. Additionally, while Venice is home to only a quarter of a million people, the growing Indonesian megacity has increased its population from 150,000 to an estimated 25 million residents in the last century alone. 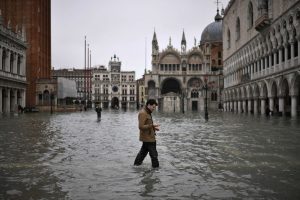 These coastal and geographical hindrances are the result of environmental changes these past hundred years. Especially as the Adriatic Sea and Jakarta Bay continues to rise, these coastal solutions would be thought to be on the forefront of these countries’ policies. However, this is not the case and other countries are instead rising to the challenge. Coastal climate change implications are not just a regional issue. Globally, more than 50% of the population live in cities, the majority of which are located on the coast and countries with coastal regions often have a higher GDP and contribute more to the global economy. While in Jakarta, the partial source of this sinking can be traced back to government mismanagement of groundwater supply and land subsidence regulations, for these coastal cities, the culprit is a lack of international cooperation in combating climate change.

While Jakarta and Venice both look to uphold substantial urbanizing centers and tourism industries, this influx in rapid growth causes both economic and environmental problems for the regions as urbanization tries to adapt to keep up with the needs of its citizens and sinking coast. However, these are not the only two cities that face these challenges. As the need for international climate solutions become more pronounced, it is beneficial for the international community to look to other coastal cities for aid in their shared challenges. For Jakarta and Venice, Rotterdam  is that city from which to ask for help; a city which has become internationally recognized for its work in sustainable efforts- even championed as “the perfect showcase for climate change adaptation”. In fact, the Netherlands is so highly regarded as being at the forefront of sustainable solutions, that when the Indonesian government decided to construct a 40 billion dollar Garuda Seawall project, it was the Dutch that weighed in on the engineering of their former colonies’ flood mitigation strategy (pictured below). The project to develop the Garuda Seawall is a joint Indonesian, South Korean and Dutch venture, championed the National Capital Integrated Coastal Development (NCICD) programme. However, this has not been without resistance from Indonesian residents. An interesting factor in this partnership is the former history of colonization between the Netherlands and Indonesia. This has led to a lot of distrust between local residents and the government as they are allowing a Dutch company to run and finance the operation that will ultimately be the solution to save their communities and their lives. 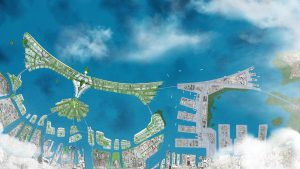 While Jakarta grapples with the advice from the Netherlands and the environmental and cultural conflict within its state, Venice has been able to begin tackling its environmental issues through the CDC, all the while looking to Rotterdam as that aforementioned “perfect” example of climate change adaptation”. The benefit of this mentorship that Jakarta doesn’t have is the ease of following the example of a fellow Western-championed city with similarities in geography, culture, and in this case, the benefits of the European Union. As Venice began developing a Climate Action Plan, they identified flooding and an increase of rain as causes, much like Rotterdam (and Jakarta), and began mimicking the policies and budget after their sister European city. The Connecting Delta Cities’ plan for Venice was to relate environmental and economic policies “with the main town Planning Instruments, to include their objectives and coordinate many of the future actions like the Town Physical Plan, the Water Plan, the Urban Mobility Plan” for ease in implementation. However, a unique characteristic of Venice is that 61% of the city’s surface area is water. This allows for some change in policy and scientific ingenuity similar to that presented in the Jakarta Garuda Seawall, as the lagoon of Venice that much of the city survives on is a partially “man-made environment” and must be continually maintained. These are the kinds of challenges that some regions of the world face, and it would benefit Jakarta and Venice to work together as part of the CDC to find solutions for both their cities and the future. Yet, despite this mutual problem, Venice is the only one receiving international attention. 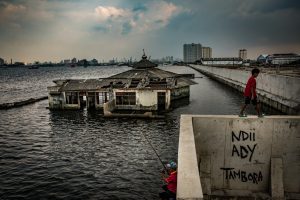 This only goes to show the level of care and attention given to cities in different regions: global north or south. While on the CDC website, Rotterdam gets to claim the title of the model delta city, Venice also gets a nod to “improving its overall resilience” and dedication to “ protecting its people and national heritage”. Meanwhile, Jakarta’s information is limited, and gets the subtitle of “aiming to reduce flooding in the city by 75% by 2016″. There are certain limitations involved in combating climate change policies that Western countries have an advantage in due to economic and political ties. For example, the most important factor in the South Pacific development is that while coastal Jakarta may first be affected and the ten millions residents who call the coast home, it will also impact the periphery and its additional 18 million Indonesian residents who depend on the capital city for survival. But this expansion is not calculated in the most western reports of the city’s population: listing the population in the ten millions, not closer to thirty million. Yet, Jakarta’s business district alone generates one sixth of Indonesia’s total GDP and consequently this capital city has a role on the world stage. Despite this claim to become a major contributor to the international economy , the Netherlands and South Korea feel they have an economic interest as well as a former colonial responsibility to help advise and finance the development of the Garuda Seawall. There are some countries who feel that they should be granted the time to develop without the imposition of global environmental restrictions like India and Indonesia, and other countries who want to, in this case, help finance these operations to find more economical and environmental solutions like the Netherlands and South Korea. In return, these nations are able to boast that they can help finance and supervise future ventures in these economic ventures and the creation of green development of these artificial islands. They will also be able to champion the development of future preemptive solutions that coastal countries will soon need to invest in.