By now you may have heard of stories concerning COVID-19 and climate change, suggesting that the virus has been good for our planet. One such tweet went viral, showing the Venice canals clearing up since people are not around to pollute them due to quarantine. 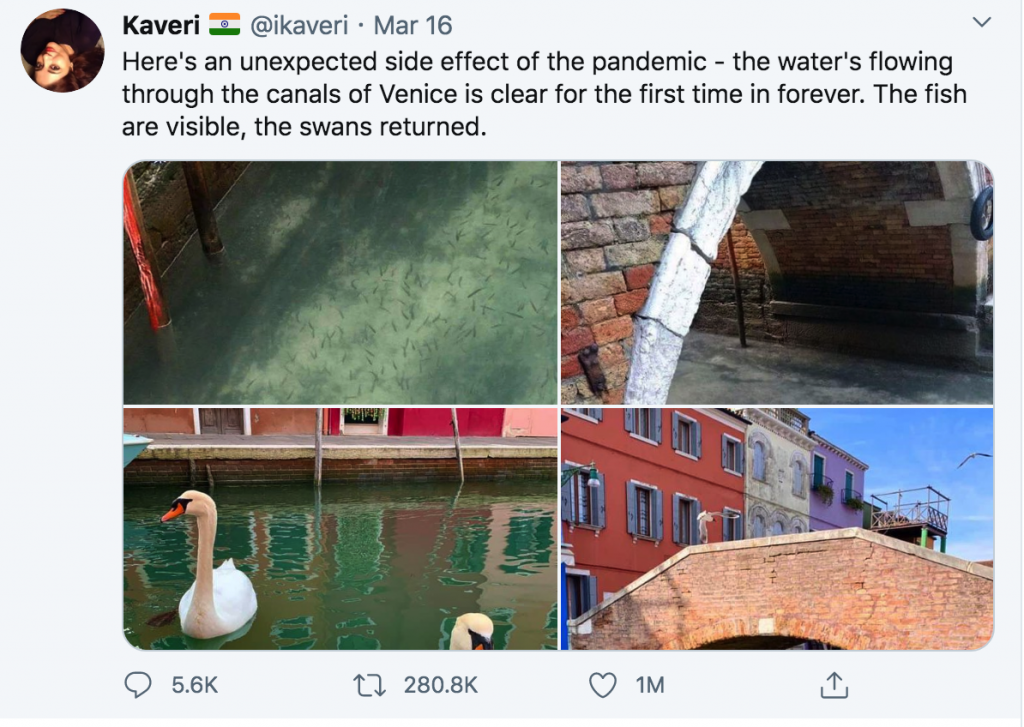 This may seem like a positive, but another, darker tweet appeared a day later. This tweet, shown below, suggests that “Coronavirus is the Earth’s vaccine. We’re the virus”. 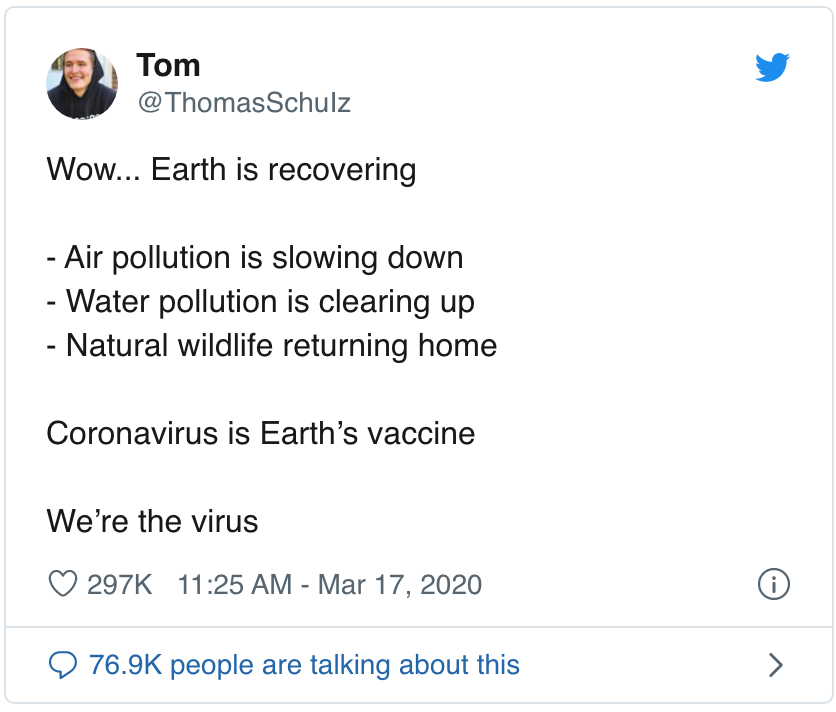 While many people agreed with this twitter user, causing the tweet to go viral, the tweet became a meme after some folks realized the eco-facist nature of these tweets. A stream of memes ensued, attempting to show those that supported the original tweet just how ridiculous and ignorant it was. Even the author of the article showcasing those memes didn’t seem to understand their true meaning, stating “people have been posting photos and videos of animals flourishing in our new less-human, and thus less-toxic, environment”, and “but by all accounts, nature is healing. And though we may be the virus, we’re a hilarious one”. Humans are not the virus, and this whole ordeal is no joke.

An article by UN News put it well when it stated that positive impacts on the world are temporary, particularly in light of the economic and human impact the virus is having on the world. Scripps Institute of Oceanography also noted that for carbon dioxide levels to truly be impacted, fossil fuel use would have to decline by about 10 percent around the world for a year.

If anything, the fact that the coronavirus hit the world so strongly only shows that the world is nowhere near “healed”. With climate change and its contributors, the chances of more zoonotic diseases (those carried by animals and given to humans) like the coronavirus only increase. 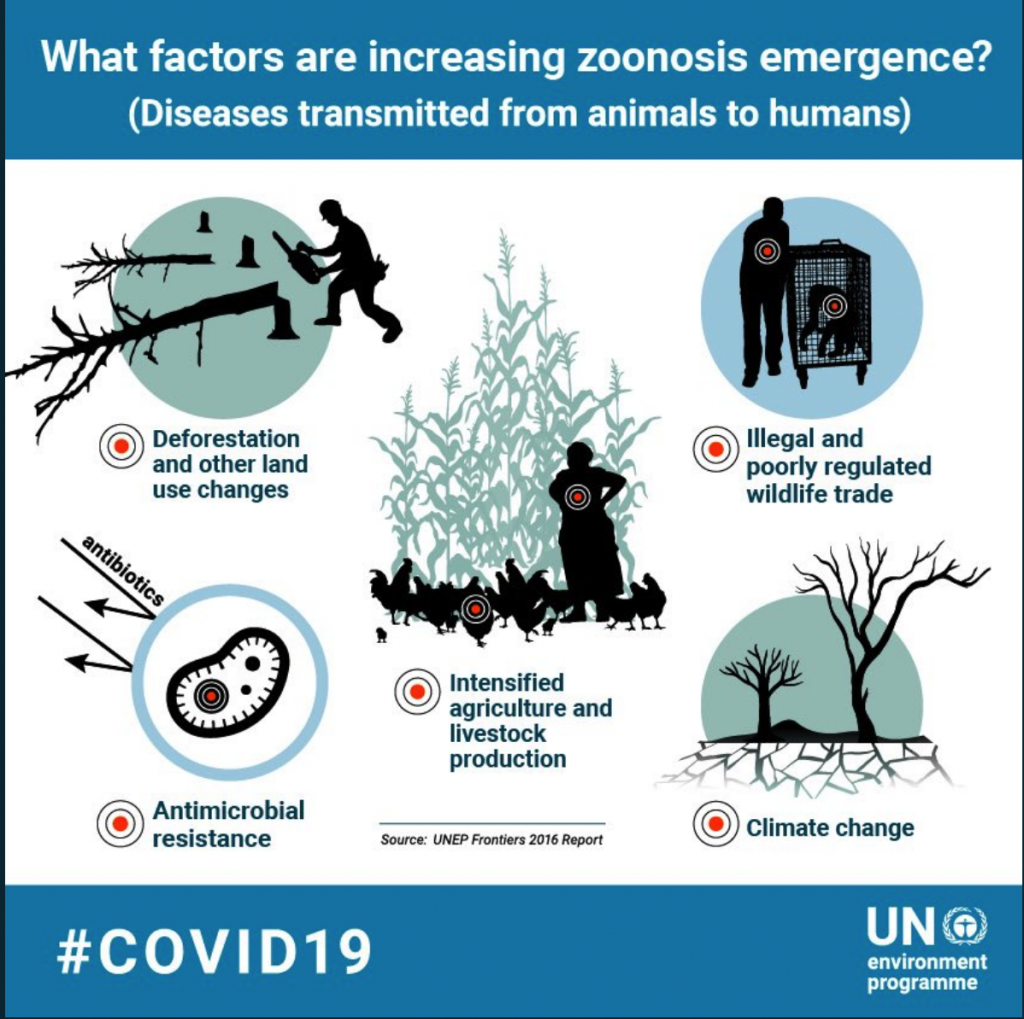 Changes in temperature, humidity & seasonality directly affect the survival of microbes in the environment; & evidence suggests that disease epidemics will become more frequent, as the climate continues to change. UN Environment Programme.

Coronavirus will most likely clear up in the summer, or by next year. When it does, the world will most likely go back to the way it was, perhaps at double the speed to make up for lost time and money. But we most likely won’t be forgetting the virus and its global impacts any time soon.

We will have a real opportunity to enact systemic changes in our country and around the world after all of this is over. We finally have the world’s ears, because we have to listen to one another at a time like this. Will we make the move towards real, systemic changes to our systems of healthcare, transportation, energy, policy, and more? Will we band together as a world to truly change our future here on this planet, particularly for those most at risk of the effects of climate change? Or will we continue with our everyone-for-themselves mentality that we hold so dear in this country? Only time will tell.

Though almost nothing is sure right now, a few things are: the Earth is NOT healing itself, and humans are NOT the virus.

The Coronavirus Meme About “Nature Is Healing” Is So Damn Funny

First Person: COVID-19 is not a silver lining for the climate, says UN Environment chief

COVID-19 and climate change: What can we learn about saving lives?