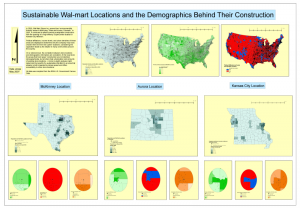 Wal-Mart Stores Inc. has grown in the last forty years to be one of the most successful retailers in the world. In 2007 the company reported having 1,063 regular stores and 2,285 Supercenters in the United States alone1. This success, however, has been subject to great controversy. The retailer has been criticized from its labor practices to its competitive strategies. Mainly, it is its architectural impact, construction of what has been deemed the ‘big box’ by many, which has caused resistance to its existence in many communities. This construction, which is not only visually uninspired, is considered by critics to be unsustainable.

In an attempt to counteract accusations that it has cluttered the American landscape with unsustainable construction, Wal-Mart has decided to ‘green.’ In 2005, the company opened two experimental locations, in McKinney, Texas and Aurora, Colorado, which it claims are environmentally sustainable. In a press release Wal-Mart states that, “the goals for both experimental stores […] were to reduce the amount of energy and natural resources required to operate and maintain the stores, reduce the amount of raw materials needed to construct the facility, and substitute, when appropriate, renewable materials2. ” In early 2007, the retailer also opened a new “High Efficiency” Supercenter in Kansas City, Missouri that it claims will use twenty percent less energy than existing stores of its size3.

The purpose of this spatial analysis is to examine these new sites in relation to the communities in which they are constructed. As a corporation concerned with public relations, it is to be assumed that Wal-Mart Stores Inc. has, at least in part, developed these sites to boost its image amongst its abundant critics. The demographics of the communities in which these ecological friendly stores were promoted and developed are essential to understanding both the commitment of Wal-Mart towards meaningful public relations and the feasibility of continuing this new construction in areas that are most likely to resist the retailer’s attempts to develop. In other words, is Wal-Mart choosing areas that will truly benefit from sustainability and what are the demographics of the communities that allowed the development? This initial analysis is too seek the true intentions of Wal-Mart as a company interested in both the ecological benefits of sustainable construction and the relations it has with the overall public, critics included, in regards to social welfare.