A cartogram is a thematic map in which some variable (e.g. population)  is substituted for land area.  The alternate variable is conveyed through a distorted geometry  of the map.  This example displays the state origins of the Smith Class of 2012. 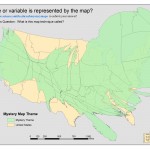 December 2008 Mystery Map displaying class of 2012 as a cartogram

View as a Google Earth File