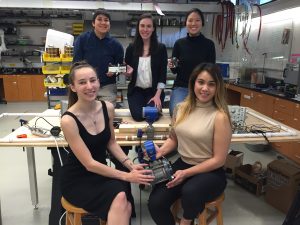 After establishing the key requirements for the device, the team employed a systems approach in their design, focusing on the design and integration of multiple sub-systems: a buffer system to attenuate the signal, an analog-to-digital converter (ADC) and microprocessor unit (MCU) system to digitize the data, and a memory system for storage. The team constructed the buffer system, identified and selected ADC and MCU and memory components, and wrote the associated software. The team then integrated the different components into a complete system. The team developed an extensive testing protocol to evaluate component performance and verify the overall system functionality.

The team delivered their functional prototype, associated code, documentation of verification testing, and recommendations for future development to their liaisons for continued product refinement and implementation.