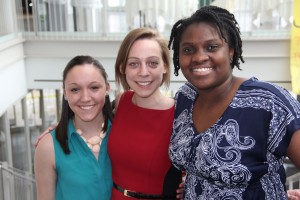 2013-2014: This team worked in collaboration with the Department of Defense Special Operations Command (DoD-SOCOM) through the Stevens Institute Capstone Design Marketplace.

Maintaining core body temperature is vital to Special Operations Forces when they are on missions in hot environments. Detrimental physiological and psychological side effects occur when core temperature increases as little as 2° C. One method of maintaining temperature is to wear underneath protective equipment a vest interwoven with tubes through which water circulates and is itself cooled by a small refrigeration unit. The team developed an energy balance/heat transfer model for an operator utilizing such a cooling vest under various levels of physical exertion. They designed and conducted a preliminary set of experiments that evaluated the performance of the vest and accuracy of the model. The results indicated that other cooling mechanisms (respiration, perspiration, and solar radiation) need to be included in the model to account for varying field conditions, and longer duration tests must be run to evaluate the system fully.

The team delivered their model and experimental results to the sponsor with recommendations for further work that can achieve the ultimate goal of developing a control algorithm that will maximize battery life in the refrigeration unit while maintaining core temperature within acceptable limits.